FRIDAY HR FAQS – Do I need a Mental Health First Aider in the workplace? 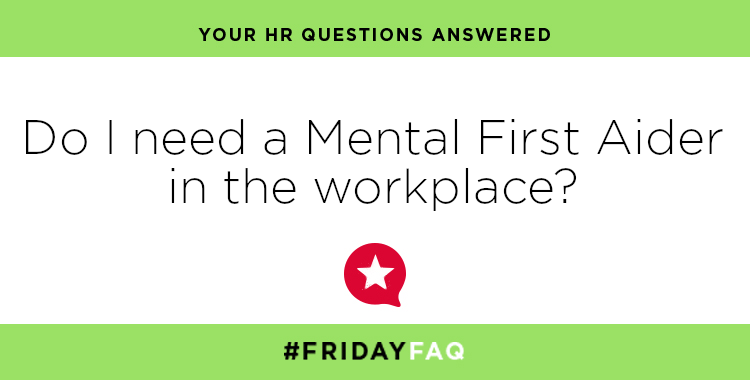 It was Time to Talk day yesterday (Thursday 7th Feb) and a new survey of nearly 950 managers in the UK found that less than a third (30 per cent) have been trained in managing mental health in the workplace in the last year. More worryingly half (49 per cent) have never received any training on managing mental health problems and 20 per cent had received training but more than a year ago.

The NHS planned to spend £11.9 billion on mental health in 2017/18. That’s roughly one in every ten pounds spent by the Department of Health, an increase of 4% from 2015/16 (fullfact.org)  That’s a lot and shows there is a real need for increased awareness.

The Chartered Institute of Personnel and Development (CIPD) research supports this, finding that in 2018, poor mental health was the most common cause of long-term sickness absence in UK workplace and that stress-related absence had increased in nearly two-fifths of organisations (CIPD 2018).

Employers are also starting to realise the importance of promoting and investing in good mental health within the workplace and the responsibility they have to their employees.

It can be difficult to spot signs of mental health problems in the workplace and many people are still reluctant to talk about their issues or struggles, with the fear of how they may be perceived by their colleagues and managers and how it will affect their careers and working relationships. Some common signs of mental illness to look out for though, include a dip in general morale and productivity in their role, reluctance to participate or co-operate, withdrawal from friends or colleagues, increased anxiety and negative changes in behaviour.

Having a Mental Health First Aider in the workplace can assist in recognising symptoms, support those who are in need and can guide the person to the relevant help as needed.

Similar to a first aid course, to become a qualified mental health first aider, you will need to attend a course which has been developed by MHFA England. The two-day course teaches delegates practical skills to spot the signs and symptoms of mental illness and teaches them how to be more confident in approaching and helping someone who may be suffering, how to really listen to them without interrogating or being judgemental, and how to help reduce the general stigma surrounding mental health.

Having someone who knows how to react and support someone who is struggling can make the world of difference to that person, and it is usually through relatively small and simple acts of compassion.

Although having a Mental Health First Aider within the workplace isn’t a legal requirement, more and more businesses as recognising the support they can offer to employees, so they are becoming more common place which is a great start! The fact that people are talking about these issues more openly is really making a difference, and we aim to support our clients in creating cultures of openness and empathy where mental health is promoted.

If you would like more information on organising a Mental First Aider for your business, please get in touch.